Peru, Indiana - May 10, 2019 - Round 5 of the GNCC took place over the weekend in Peru, Indiana, as thousands of fans and spectators alike gathered for what would shape up to be a weekend full of close calls and action-packed racing. Severe weather conditions from previous days leading up to the event saturated the track and made for difficult race conditions for the stacked roster of GNCC competitors. GBC Motorsports sponsored riders were in full attendance and ready for competition as we awaited the green flag. 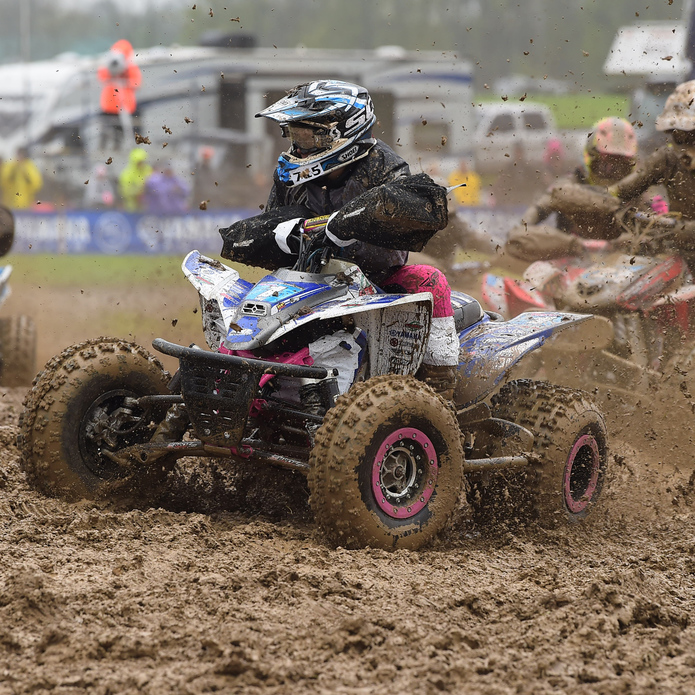 Its race day in Peru Indiana for Round 5 of GNCC X-Factor. 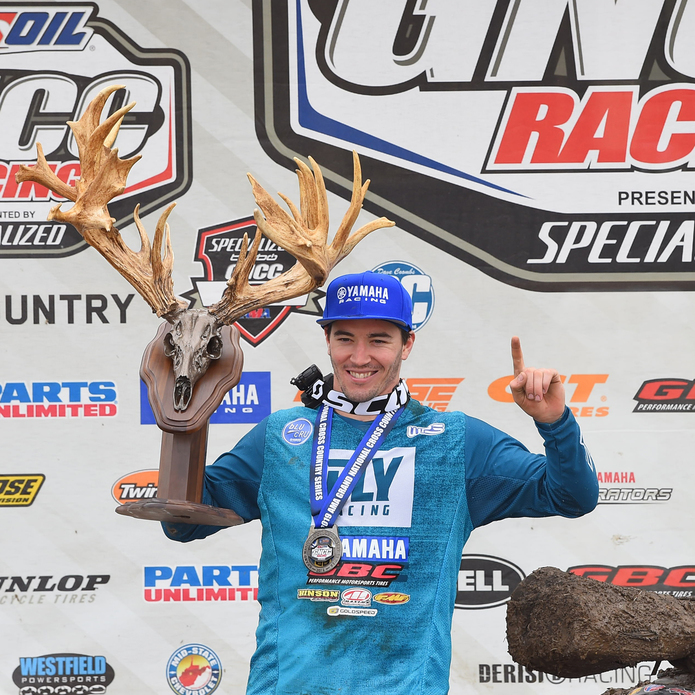 Walker Fowler returned for Round 5 recharged and ready for action as he sat patiently awaiting the start of the XC1 class race at X-Factor Whitetails GNCC. Fowler was off to an excellent start early on as he was able to secure the Wiseco Holeshot on the muddy terrains of Indiana. As the race progressed, Fowler was able to separate himself from the congested pack and gain a significant lead, but later found himself engaged in battle for the top spot after falling back to a 2nd place position at the start of lap three. After making a few quick adjustments and finding his rhythm, Fowler once again stole the lead and was able to cross the finish line with his first win at X-Factor Whitetails. Fowler’s victory also marks his 49th overall career win and 4th win of the season, bringing his points lead to 36 as he continues his “Strive for 5” campaign. GBC Motorsports sponsored racers Cole Richardson, Westley Wolfe, Joshua Merritt, Devon Feehan and Johnny Gallagher all rounded off the top 10 class finishes for the XC1 Pro class. Congratulations to all of our sponsored racers on their amazing performances! GBC Motorsports XC1 class racers all compete on XC-Masters and Ground Buster 3 performance tires. 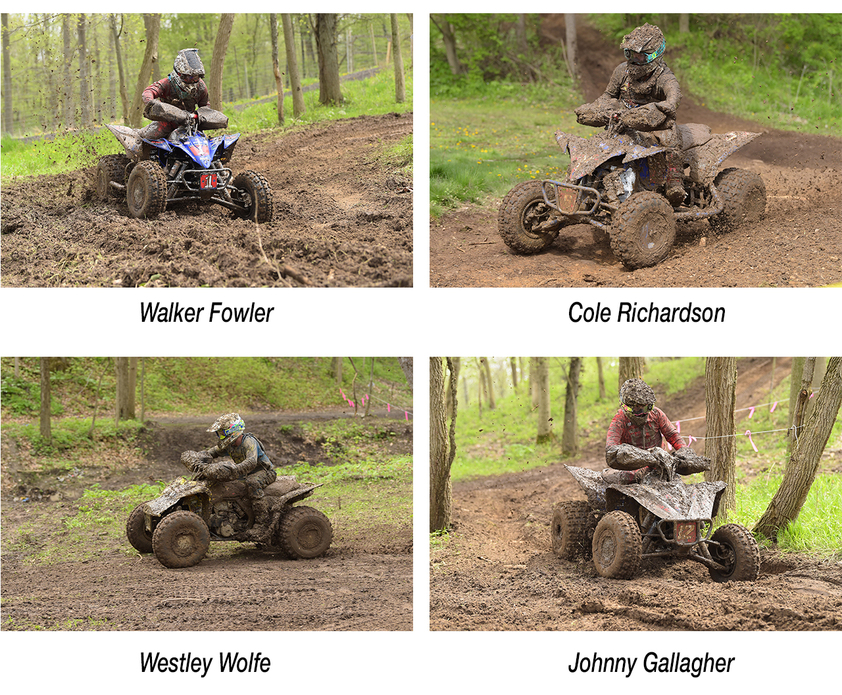 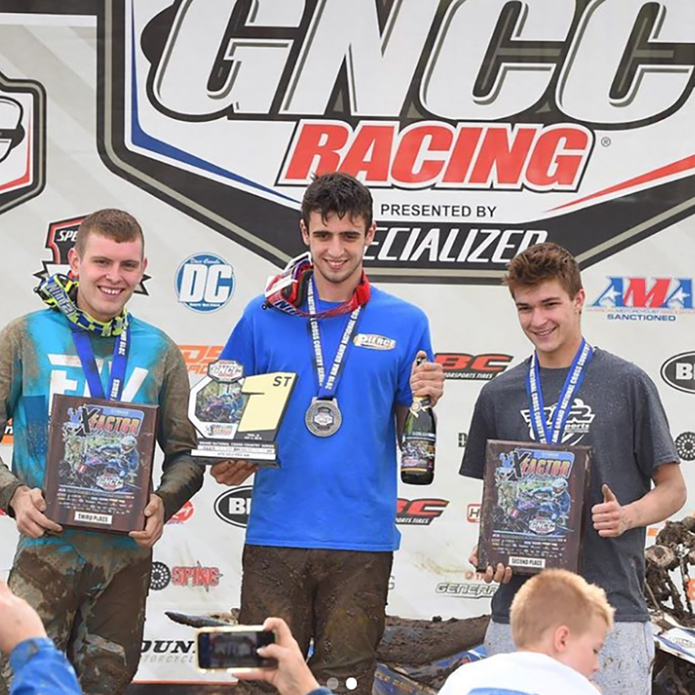 GBC Motorsports sponsored racers Matthew Blankenship and Tanner Walker captured the 2nd and 3rd place positions in the XC2 Pro-Am race. Both racers walked away with their first XC2 podium wins and career best finishes for the cheering fans at X-Factor Whitetails. Blankenship displayed excellent track awareness and skill as he charged hard in pursuit of the lead, crossing the line with a well-deserved 2nd place finish. Fellow sponsored racer Tanner Walker also displayed his racing abilities and competitive nature as he rocketed past other pro racers and track obstacles for his best finish of the 2019 race season. As the GNCC series progresses, we look forward to seeing what these two great competitors bring to the table both on and off the track. As we get ready for Round 6 of the series, Blankenship currently sits in 8th in class points with 63, while Walker occupies the 5th spot with 81 total class points. Congratulations to our sponsored racers on their incredible performances! GBC Motorsports XC2 class racers all compete on XC-Masters and Ground Buster 3 performance tires 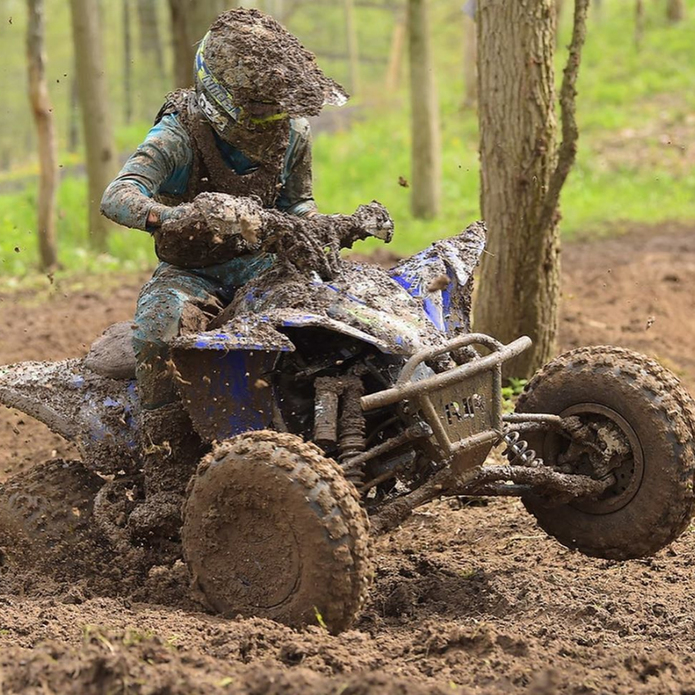 Tanner Walker on the his way to a 3rd place Pro-Am finish. 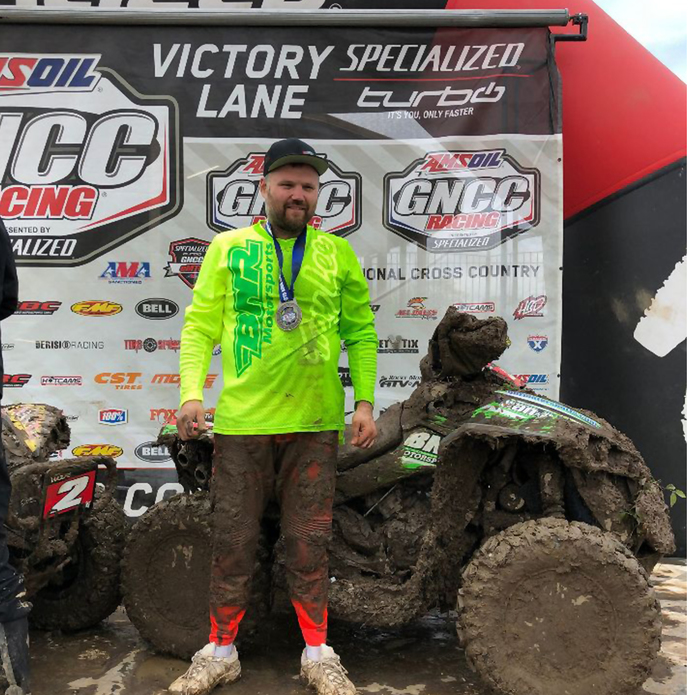 Rob Smith finished on the 4x4 Pro podium for the second time this year.

4x4 Pro racer Robert Smith ended Round 5 with his second podium of the season, crossing the finish line with the 2nd place Overall finish for the fans in Indiana. Smith is no stranger to the ups and downs of professional racing, having racked up numerous wins over the years in his pro career. At X-Factor we witnessed Smith charge hard and relentlessly while navigating the dense and muddy track at Whitetails Ranch, ending the round with the number 2 spot and boosting his total class points to 91. Smith’s consistency and drive are what set him apart from fellow racers, as he continues to improve and evolve with each race. With Round 6 looming around the corner, we are anxious to see what Smith has in store for the GNCC 4x4 Pro class. Congratulations to Robert on the fantastic performance! GBC Motorsports 4x4 Pro class racers compete on Dirt Commander performance tires. 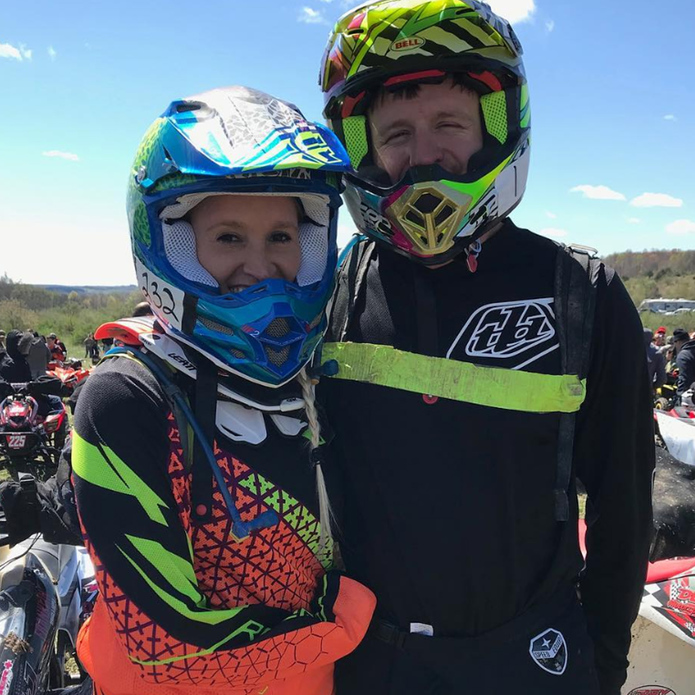 Kevin Yoho won his fifth straight Vet A race of the season.

Team GBC reigned supreme on the podium at the end of Round 5, capturing the top 3 spots in the Vet A class race. Kevin Yoho continued his unbeaten streak at this year’s X-Factor, crossing the checkered flag with the amateur top overall finish and his fifth consecutive win of the series. The victory also added a well-earned boost to his total points standing by further increasing his lead in the Vet A class. Fellow sponsored racer Jeff Pickens also had an amazing weekend at Whitetail Ranch as he locked in his fifth 2nd place finish of the season. Pickens is looking to catapult himself to the top as the series progresses, as he currently sits 5 points behind the number one spot. Longtime sponsored racer Todd Moskala also ended the round on the podium, taking the number 3 box for Team GBC and giving him his season best finish. Congratulations to all of our sponsored racers on their spectacular performances! GBC Motorsports Vet A class racers all compete on XC-Masters and Ground Buster 3 performance tires. 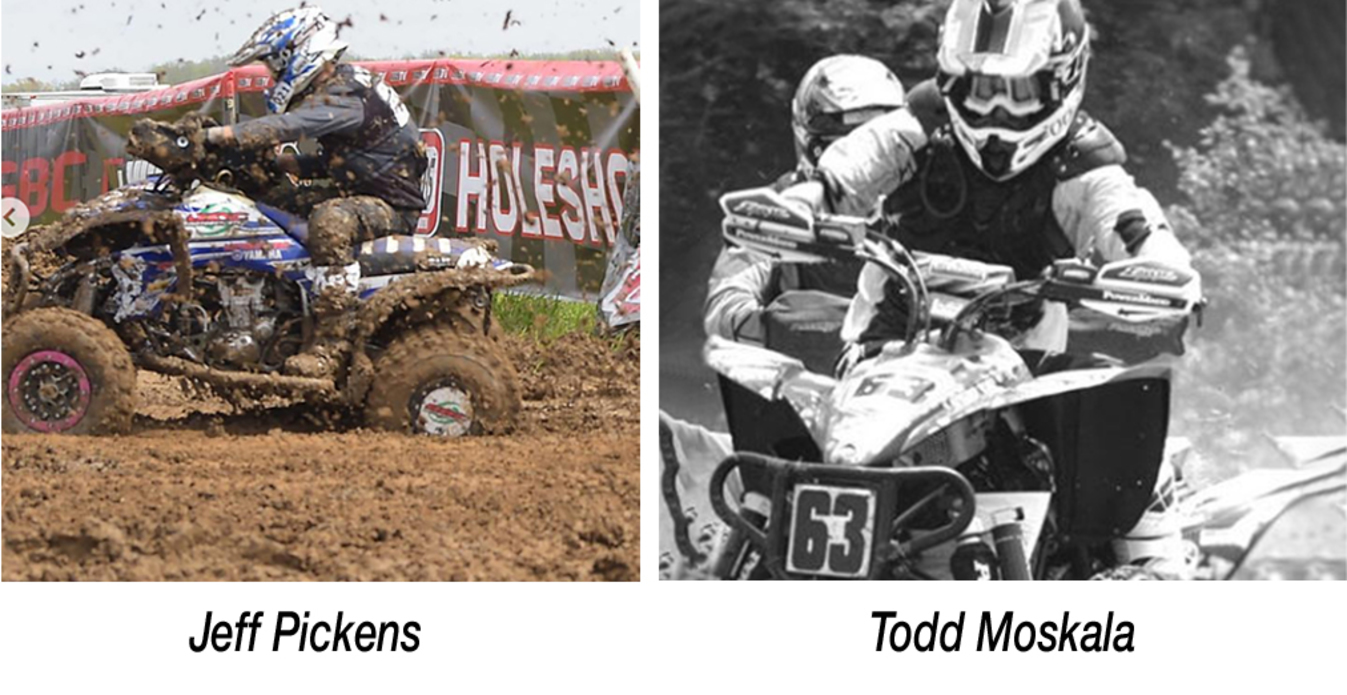 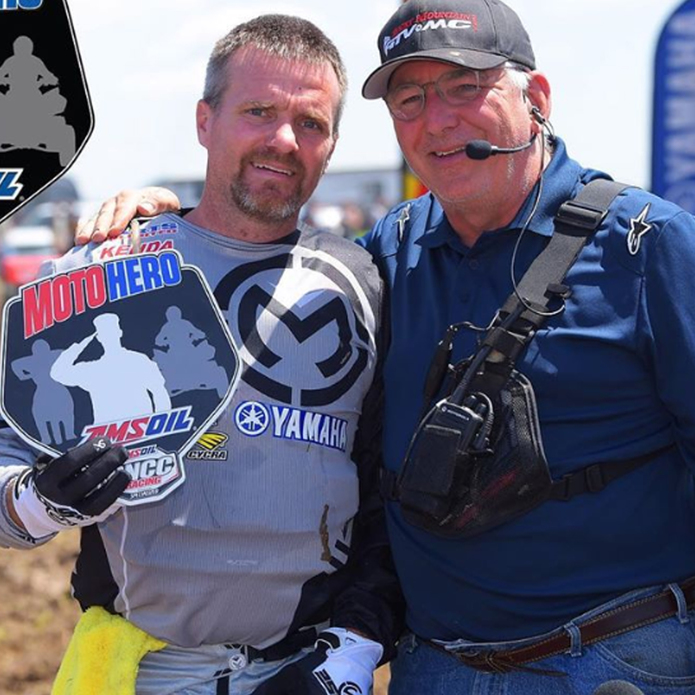 A special thanks from GBC Motorsports

Greenball/Kanati is proud to be a part of the GNCC Moto Hero program with this week’s honoree, Shawn Remington, receiving a free set of Kanati light truck tires as a gesture of gratitude for his service.