Union, SC - March 2, 2018 - Racers and fans from across the country gathered at Henry Turner’s Big Buck Farm in Union, South Carolina for what would turn out to be an exciting day full of high octane racing to open the GNCC season. Track conditions were nearly perfect, even as the looming threat of rain overshadowed the dynamic race course made up of open fields and densely wooded sections. Showing up in full force was the local racing community, creating an endless sea of supporters. As record numbers of fans arrived, GBC Motorsports was also in attendance and well represented by a diverse group of talented racers whose performances would set the stage for what is shaping up to be a landmark season in 2018! 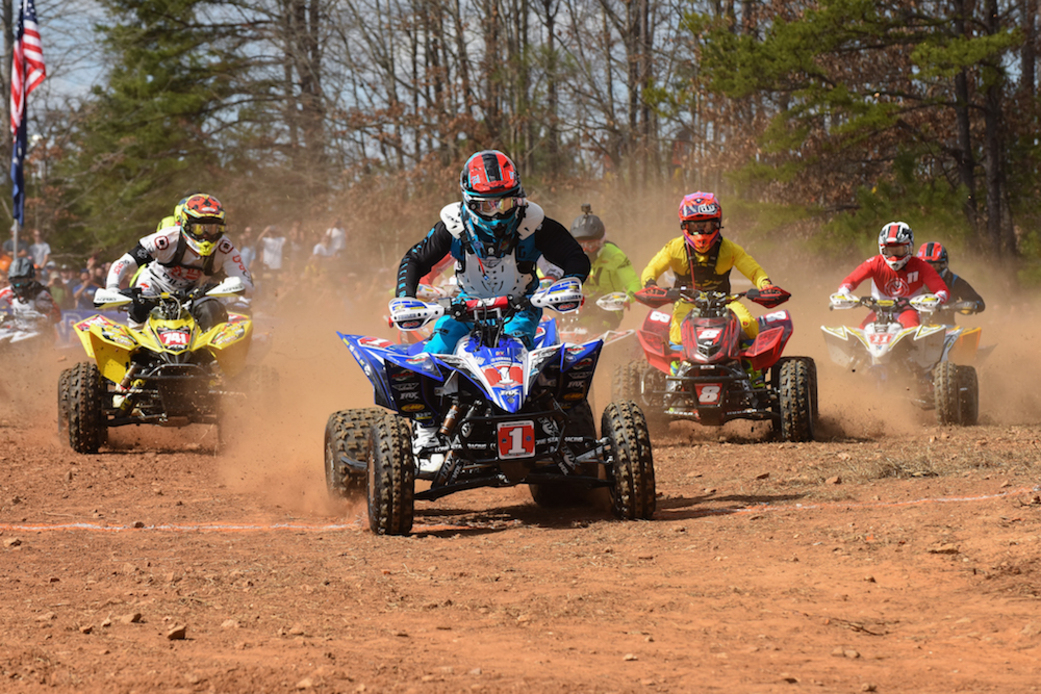 As racers positioned themselves at the starting line for the XC1 Pro class race, Walker Fowler sat calm and focused in preparation of the upcoming event. No stranger to the limelight, Fowler has been a force to reckon with in GNCC for several seasons, and has shown no signs of fatigue or slowing down. As the flag dropped, riders went head to head in a tangled pack of metal and plastic, yet Fowler was able to secure the holeshot in spectacular fashion. The defending GNCC champ maintained his lead throughout the race and would go on to secure the first win of the 2018 GNCC race season, leading every lap in the process. His dominant performance sets him atop the Championship points standings and in a great position to continue his successes of the last three seasons. 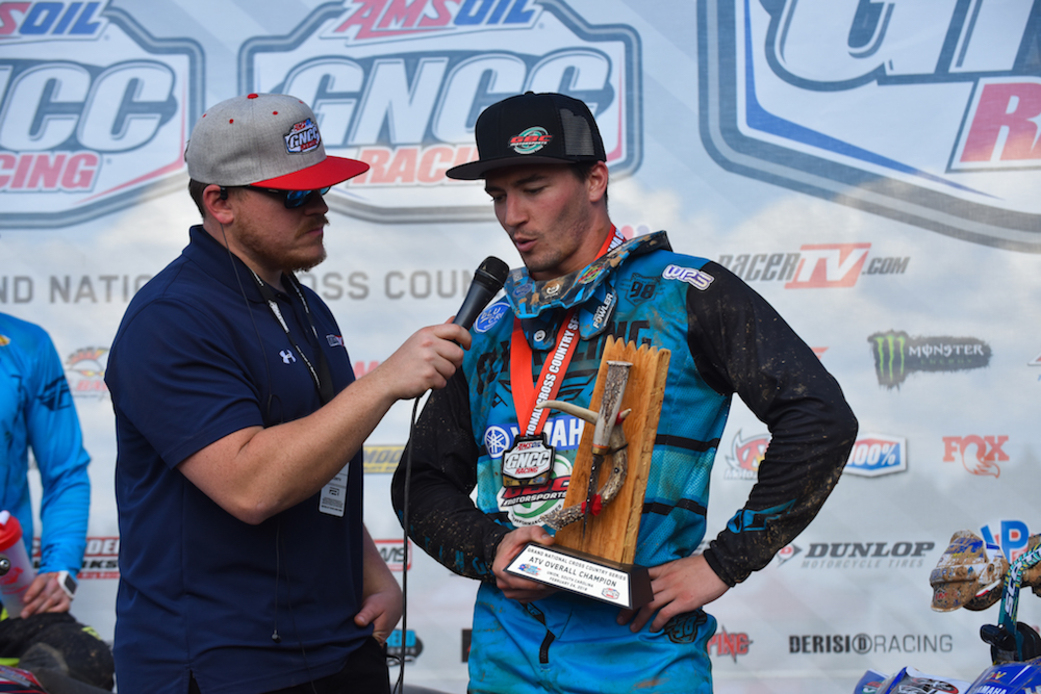 Doing double duty, Fowler climbed into his Yamaha YXZ100RSS only minutes removed from the finish of the 2-hour Pro ATV race to put in a remarkable performance in the UXC1 Pro Turbo-UTV race. Fowler would earn a 2nd place class finish and an overall 3rd place. The podium was the first of Walker’s SXS career and afterwards he credited his GBC Grim Reapers with giving him the added grip and performance needed to put it on the box. Congratulations to Walker Fowler from GBC Motorsports for an impressive victory.  Walker Fowler is a GBC Motorsports sponsored racer and rides on XC-Masters and Ground Busters 3 ATV tires and Grim Reaper SXS tires. 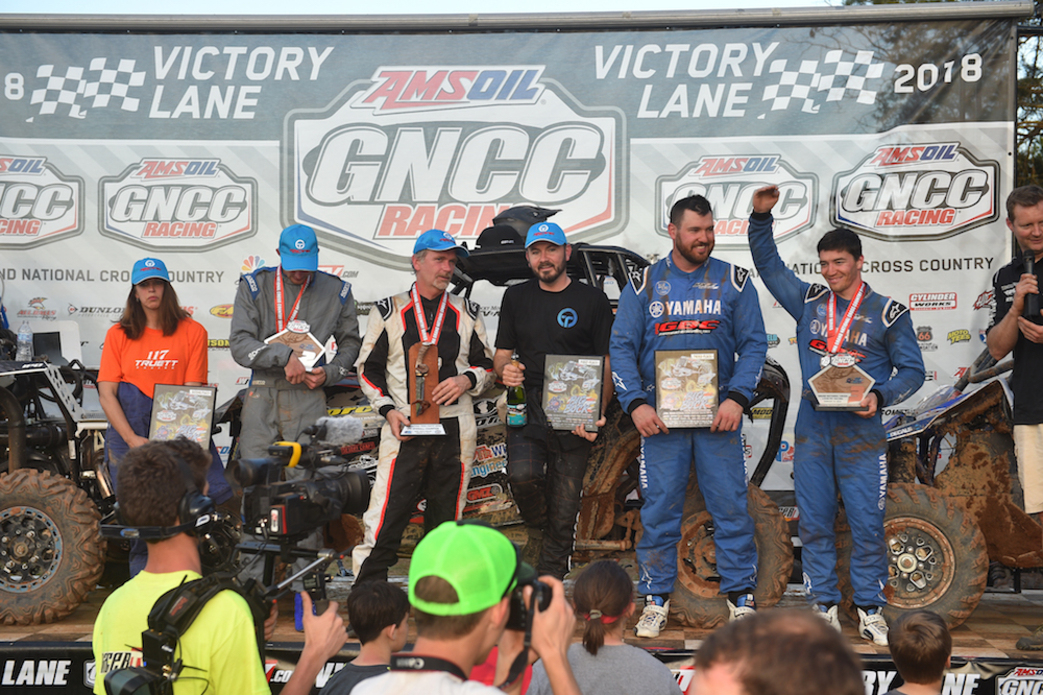 Race talk-
“It was a great way to start the season; I’m happy to grab the win for GBC in my first race! My tires were beyond impressive and gave me the confidence I needed to do my job. It’s going to be a good year!” – Walker Fowler 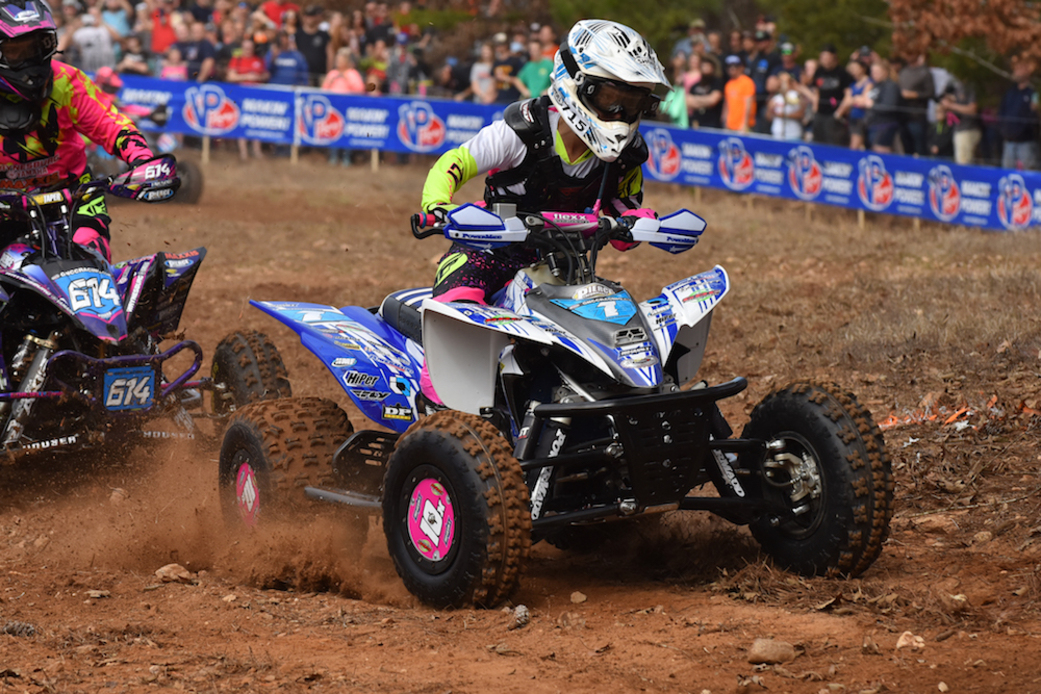 Defending WXC Champ Traci Pickens got out to an early lead in Round 1.

Traci Pickens has been a fan favorite over the years at the GNCC race series and has solidified herself among the ranks of the best in the sport. A 10-time GNCC champion, Pickens has been the name to beat among eager racers looking for a shot at the crown. Round 1 of the series was no different than any other previous race for Pickens as she came in focused on enjoying the event and putting her best foot forward. Grabbing the early lead, Pickens set the pace as the pack of hungry racers throttled through the Big Buck course. A seasoned rider and quick thinker, Pickens continued to push while in a tense battle with GBCs own Katelyn Osburn as fans cheered the sportsmanship displayed between the two riders. At the end of Lap 4, it would be Pickens grabbing the top spot. With her first 2018 victory, she has surely fueled the fire that is Traci Pickens to propel herself towards many more successes in the future. Her 1st place class finish also marks her first win as a GBC Motorsports sponsored rider. After countless years invested in the sport and a portfolio of accomplishments, it’s a wonder Pickens is able to maintain her down-to-earth demeanor. A true racer at heart and a dynamic competitor, we look forward to witnessing first hand the legend that is Traci Pickens. Congratulations to Traci Pickens from GBC Motorsports for an outstanding performance. Traci Pickens is a GBC Motorsports sponsored racer and rides on GBC XC-Master and Ground Busters 3 ATV tires. 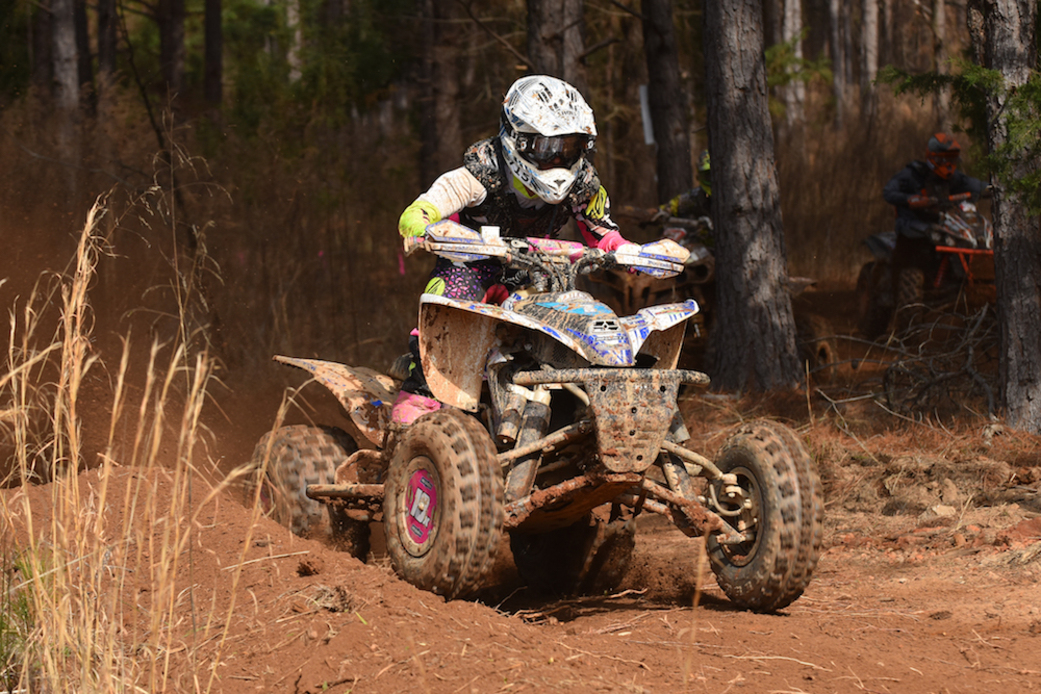 Traci Pickens raced to victory in her first race as a GBC Motorsports sponsored racer.

Race Talk-
“It was a good, fun race. I knew from pre-season practice that the GBC tires were good, but when I pushed them to race pace they really showed their true potential. The traction and cornering were unbelievable.” – Traci Pickens 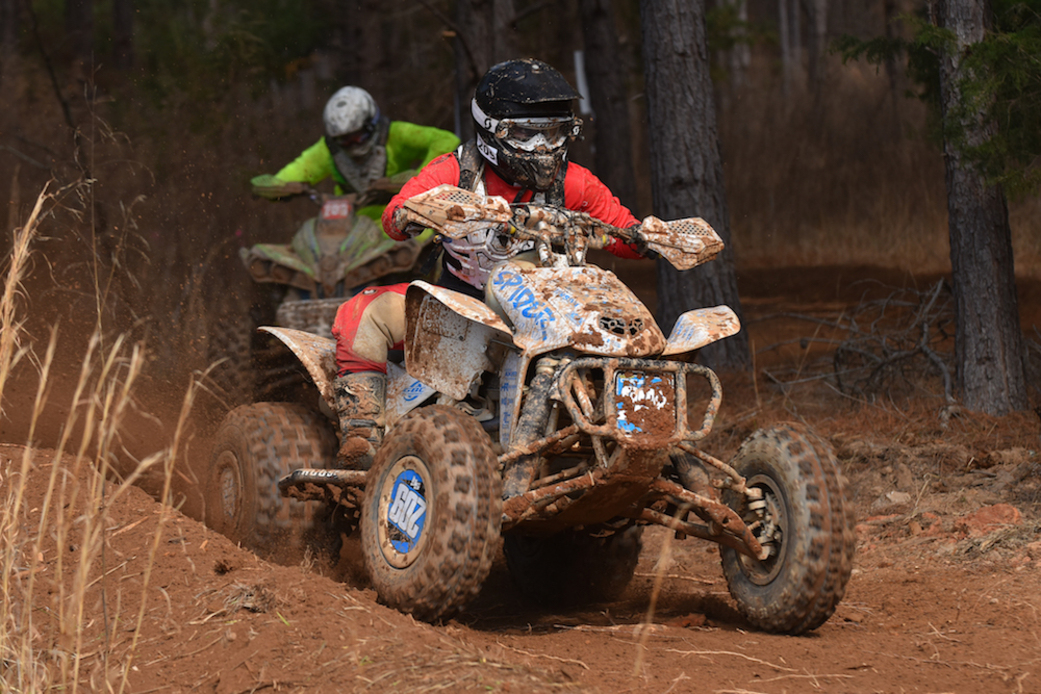 Katelyn Osburn secured a 2nd place finish and 9th overall in the opening round.

Katelyn Osburn is definitely not your typical ATV racer. A tactical racer and fearless competitor, Osburn has the abilities and talents to go head-to-head with the best and brightest stars in the sport. As racing fans and enthusiast alike sat in anticipation at Big Buck farm at the start of Round 1 of WXC, Katelyn sat patiently with one goal on her mindthe podium. The track conditions in South Carolina were no match for the skills and experience Osburn possessed, as she blasted through the tightly grouped wooded section at VP Racing Fuels Big Buck. It would be Osburn and Pickens who would duel it out for 4 laps of high energy and fast paced racing. As the WXC race came to an end, Osburn would secure the 2nd place class finish and 9th overall. As we get the 2018 race season momentum going, Osburn will be setting her sights on battling for the WXC class championship. Congratulations to Katelyn Osburn from GBC Motorsports on an outstanding performance. Katelyn Osburn is a GBC Motorsports sponsored racer and rides on GBC XC-Master and Ground Busters 3 ATV tires.

Race Talk-
“I know it’s a long season and I’m happy to start it off with a podium. I’m already looking forward to round 2!” –  Katelyn Osburn 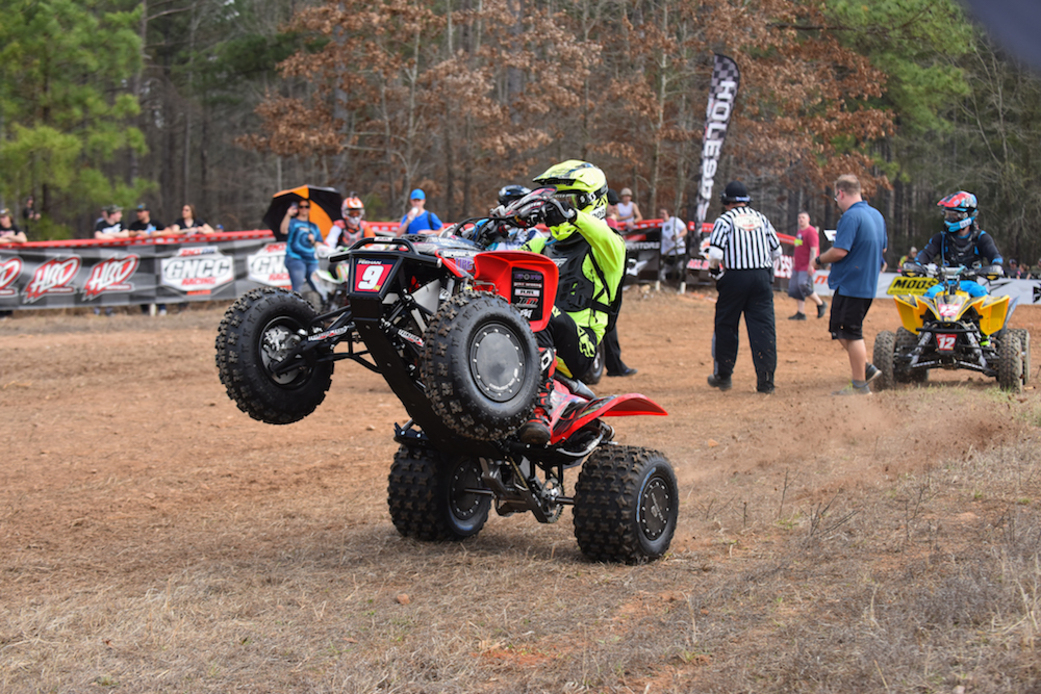 2017 XC2 Pro-Am champion Devon Feehan warms up the crowd before the race.