Morganton, NC - April 18, 2018 - Racers and racing fans from across the country gathered in large numbers at the lush and pristine Steele Creek campground in Morganton, North Carolina for Round 4 of the  GNCC series. Track conditions were slick and muddy, thanks to a previous day of rainfall, as racers made final preparations for what would prove to be a battle of wits and skill. 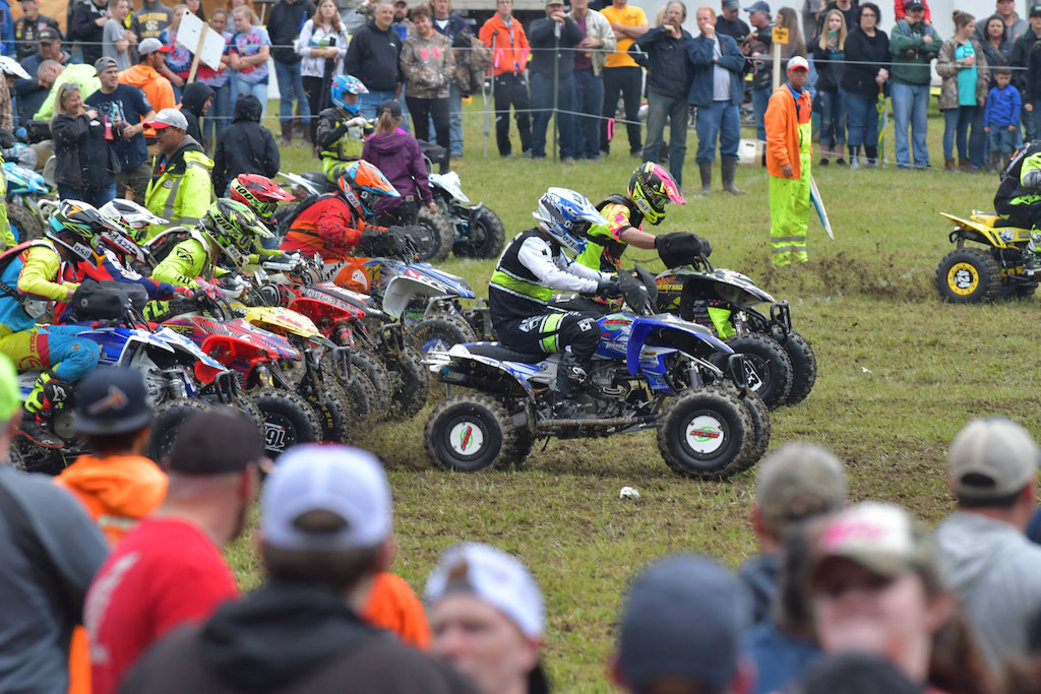 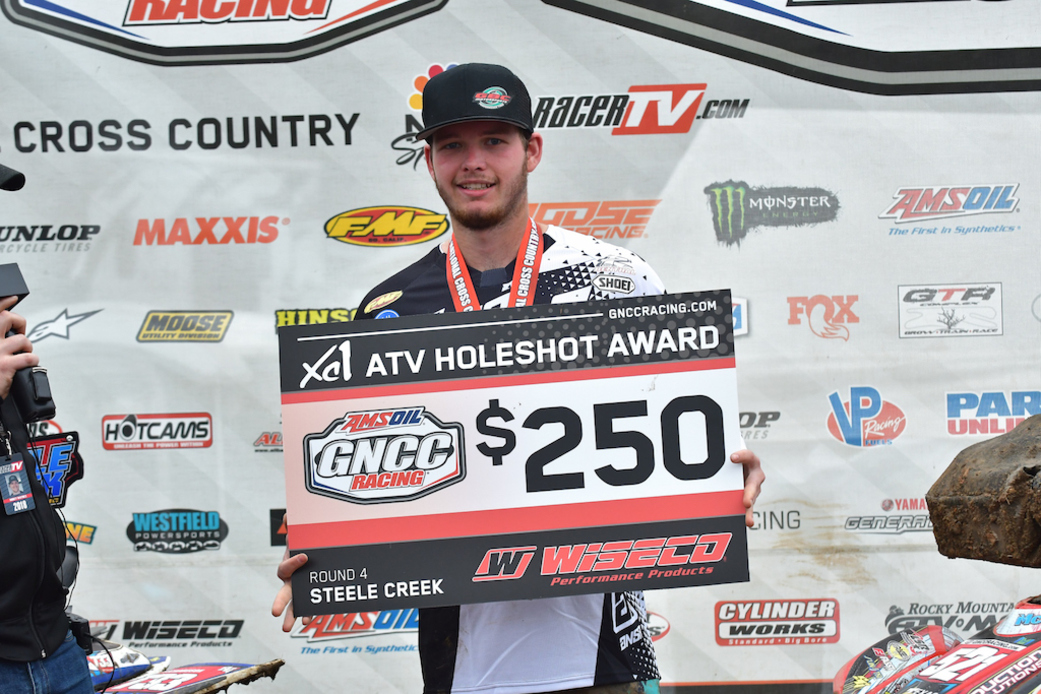 Cole Richardson arrived at Round 4 of the GNCC charged up and ready to perform. Fresh off a 4th place finish 2 weeks earlier in Georgia, the Steele Creek round would prove to be a career best for Richardson. Getting off to a good start early on, Richardson was able to establish a comfortable lead from the pack.  However, it would be Richardson and Walker Fowler dueling for position under the skies of North Carolina, as the two demonstrated exactly what it takes to be a professional racer in the competitive sport of ATV racing. An unfortunate tangle with a lapped rider in the final lap would drop Fowler and Richardson from the top two spots  back to 2nd and 3rd. Cole crossed the line a mere 1.4 seconds behind the winner. Congratulations from GBC Motorsports on your performance!  Cole Richardson is a GBC Motorsports Sponsored rider and races on XC-Masters and Ground Buster 3 tires. 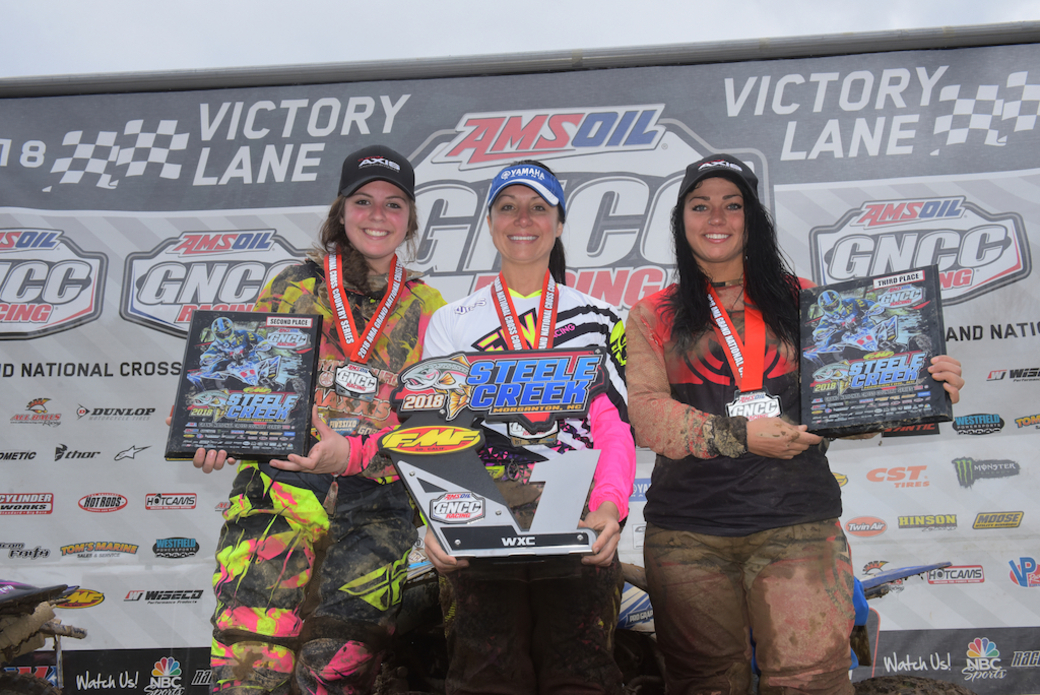 Traci Pickens (middle) got her third WXC class finish of the season.

Traci Pickens has proven to be both a true competitor and humble champion in the high octane world of ATV racing. Boasting an impressive list of victories in the GNCC race series, the name Traci Pickens has been synonymous with excellence and domination. Pickens started round 4 with a near last place start, which forced her to apply serious pressure on the pack. As she blasted through the green hills of Steele Creek, she once again fell into her zone while navigating the twisting course. The track was no match for Pickens’s racing abilities as she finished the race in 1st place, boosting her championship points total to 115. This victory also marks Pickens’s 3rd class victory of the season. Her performance and knowledge of racing reveal the layers of a champion’s mind as she continues her reign over the WXC class. Congratulations from GBC Motorsports on your victory!  Traci Pickens is a GBC Motorsports Sponsored rider and races on XC-Master and Ground Buster 3 tires. 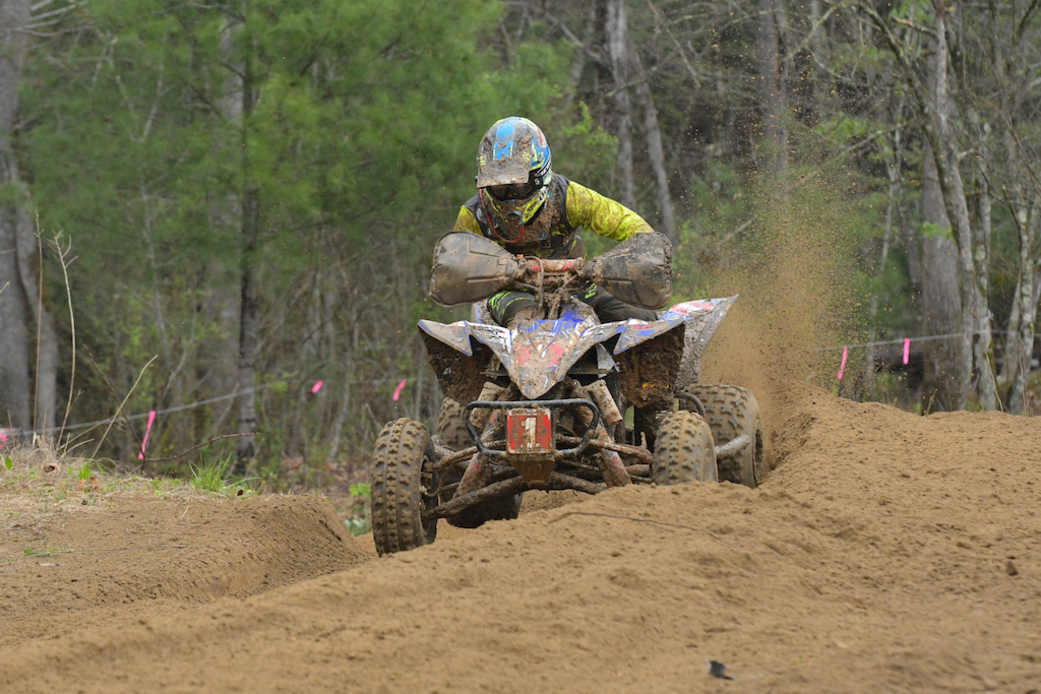 Walker Fowler has  defined consistency so far in 2018. With two previous wins under his belt, round 4 marked Fowlers 3rd podium finish of the year. From the starting line Fowler quickly accelerated through the pack, making much needed advancements early on. With a pack of hungry racers in tow, Fowler pounded the course behind his mud soaked goggles as legions of fans cheered for the champion racer. The level of intensity and competition was evident as Fowler encountered a lapped rider on the main line, which stalled his momentum on the track. Forced to make quick adjustments, Fowler recovered and turned up the heat on the XC1 class, completing the race with a 3rd place finish. At the end of Round 4, Fowler remains the championship leader with 95 points. Congratulations from GBC Motorsports on your performance!  Walker Fowler is a GBC Motorsports Sponsored rider and races on XC-Master and Ground Buster 3 tires. 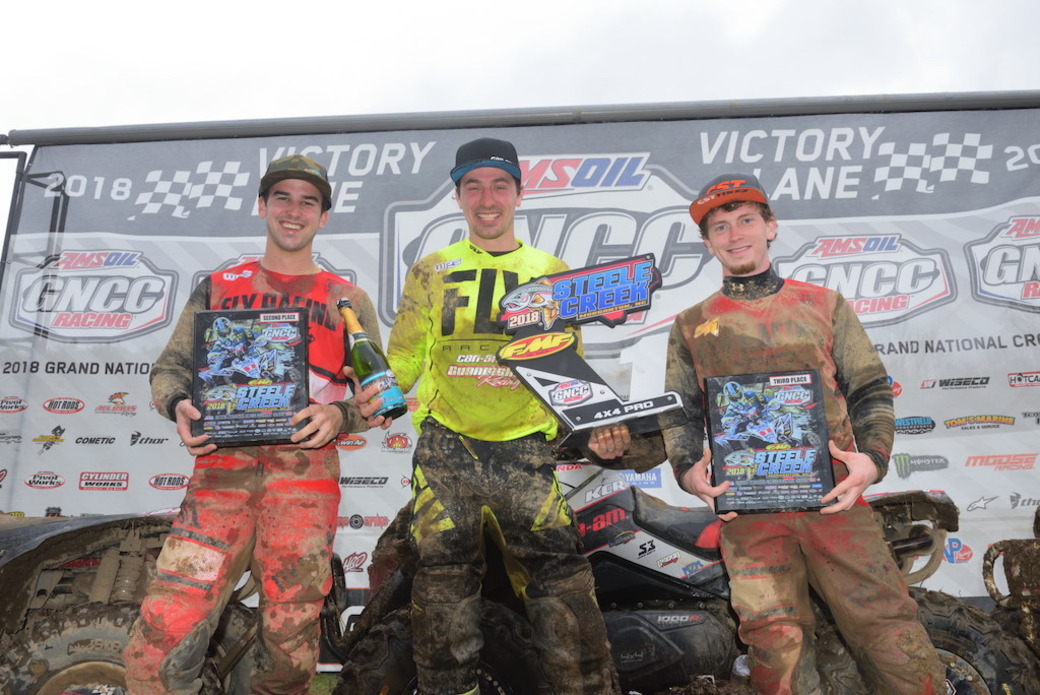 GBC Motorsports’ own Landon Wolfe has been having a great season thus far in the 2018 GNCC series. Coming fresh off of podium performances in the previous two rounds, Wolfe is currently 2nd place in the 4x4 Pro ATV class points with a total of 85. For Round 4 at Steel Creek, we found Wolfe at the rear of the pack as he sat awaiting the start of the race. Wolfe, the experienced racer and skillful rider, quickly navigated the crowded group and was able to gain some needed distance between himself and the clustered group. Wolfe displayed his racing knowledge throughout the course at breakneck speeds as he sped through dense trees and slick terrain, never straying far from the heels of the lead rider. At the end of the battle for Steele Creek, we found Wolfe atop the 2nd place box with 2nd overall finish. As we head into Round 5 we are eager to see what tricks Wolfe has up his sleeve. Congratulations from GBC Motorsports on your victory!  Landon Wolfe, is a GBC Motorsports Sponsored rider and races on Dirt Commander Performance tires. 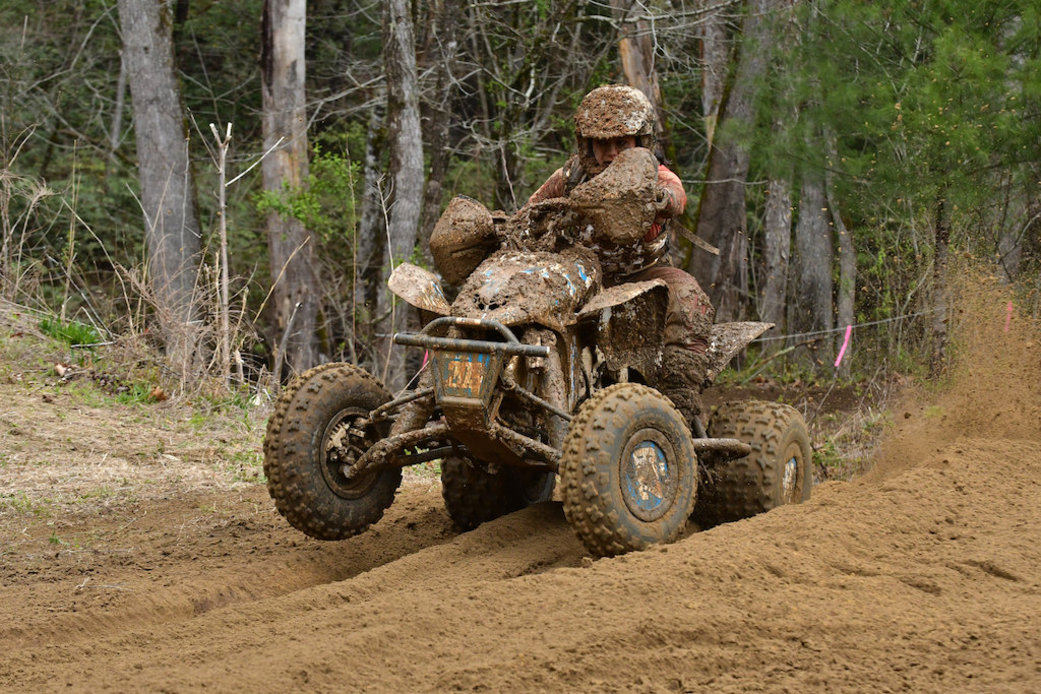 Katelyn Osburn finished on the WXC podium for the third time this season.

Round 4 of the WXC was filled with intense moments, track tangles, and close calls as top female racers from across the nation competed for the podium on the slippery hills of North Carolina. Katelyn Osborn’s 3rd place finish at Round 4 also marks her 3rd podium performance of the season, and further increases her class points. At the end of the round, she resides in 3rd place in the WXC class with a total of 80 points. After a tangle early on in the race which slowed her to a halt, Osburn charged forward and fought her way back through the carnage to snatch the box win for the cheering crowd at Steele Creek. Osburn has made her presence known at the GNCC and has shown no signs of fatigue or slowing down as we head into Round 5 at Camp Coker Bullet. As the series progresses, we anticipate many more podium placements and amazing races from the WXC rebel and wildcard. Congratulations from GBC Motorsports on your victory!  Katelyn Osburn is a GBC Motorsports Sponsored rider and rides on XC-Master and Ground Buster 3 performance tires.